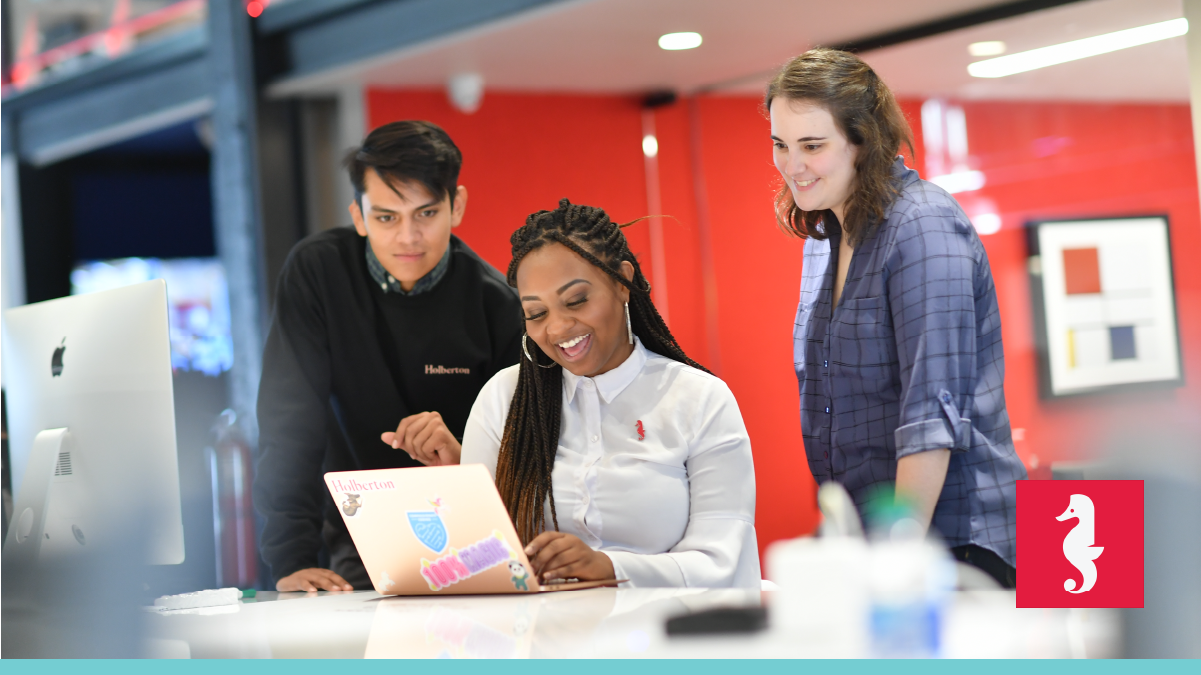 Friday, May 7, 2021, Cohort 10 ended Specialization. To conclude their journey at Holberton School, students had to build a Portfolio project. Here is a snippet of some of our students’ (great) projects.

Inès Chokri from Holberton School Tunisia worked on a project called “The Witch’s Trial” which is a VR game (arcade/adventure) in which the player is a witch and will have to pass a trial to prove their worth as one. The player will go through multiple levels (only one level has been made for now). Each level is timed and is different from the other as it tests every time the ability of the witch. The first level is the Flying test. The witch has to fly with a broom through circles and collect diamonds before time runs out. Pink rings add additional time, red rings subtract time and asteroids take a diamond from the witch.

Justin Majetich from Holberton School New Haven worked on a project called “VR Wheelchair“. It is a manual wheelchair locomotion system for virtual reality applications. The system will be packaged as a complete player controller rig which can be easily imported into an existing Unity project. VR Wheelchair is motivated by a general interest in representation within gaming. It also addresses a key strength and weakness in the medium of VR — immersion and locomotion, respectively. Read more about the project.

John Cook from Holberton School Tulsa worked on a project called “Quantum Machine Learning vs Classical Machine Learning“. This project covers a comparison between the two and describes where quantum machine learning is useful right now. Read more about this project.

Diego Felipe Quijano Zuñiga, Oscar Rodriguez, and Samir Millan Orozco from Holberton School Colombia (Cali) worked on a project callled “COVID-19 radiography detection“. This project attempts to detect through the use of data and image analysis tools in the field of Machine Learning, such as convolutional neural networks or deep neural networks, the detection of COVID-19 SARS COV2 in chest X-ray images.

Aura Marina Pasmin, Carlos Daniel Cortez Pantoja, Felipe Satizabal Vallejo, and Jorge Chaux from Holberton School Colombia (Cali) and Holberton School Tunisia, worked on a project called “Agora Events“. Pitch: Web application under the start-up mode, which aims to generate a virtual communication space for companies and people to highlight their events. The application is designed for people to post or attend different types of events as corporate, academic, cultural, and sports.

Khalil Sdiri and Rakia Somai from Holberton School Tunisia worked on a project called “Postme“. A MERN social media application with users, posts, likes, and comments – developed using React, a GraphQL server that uses Node and Express to communicate to a MongoDB Database and fetch and persist data to the app back-end.

Congratulations C#10 on finishing Specializations! We’re super proud of you and wish you the best of luck in your future career in Computer Science! Let’s do it!