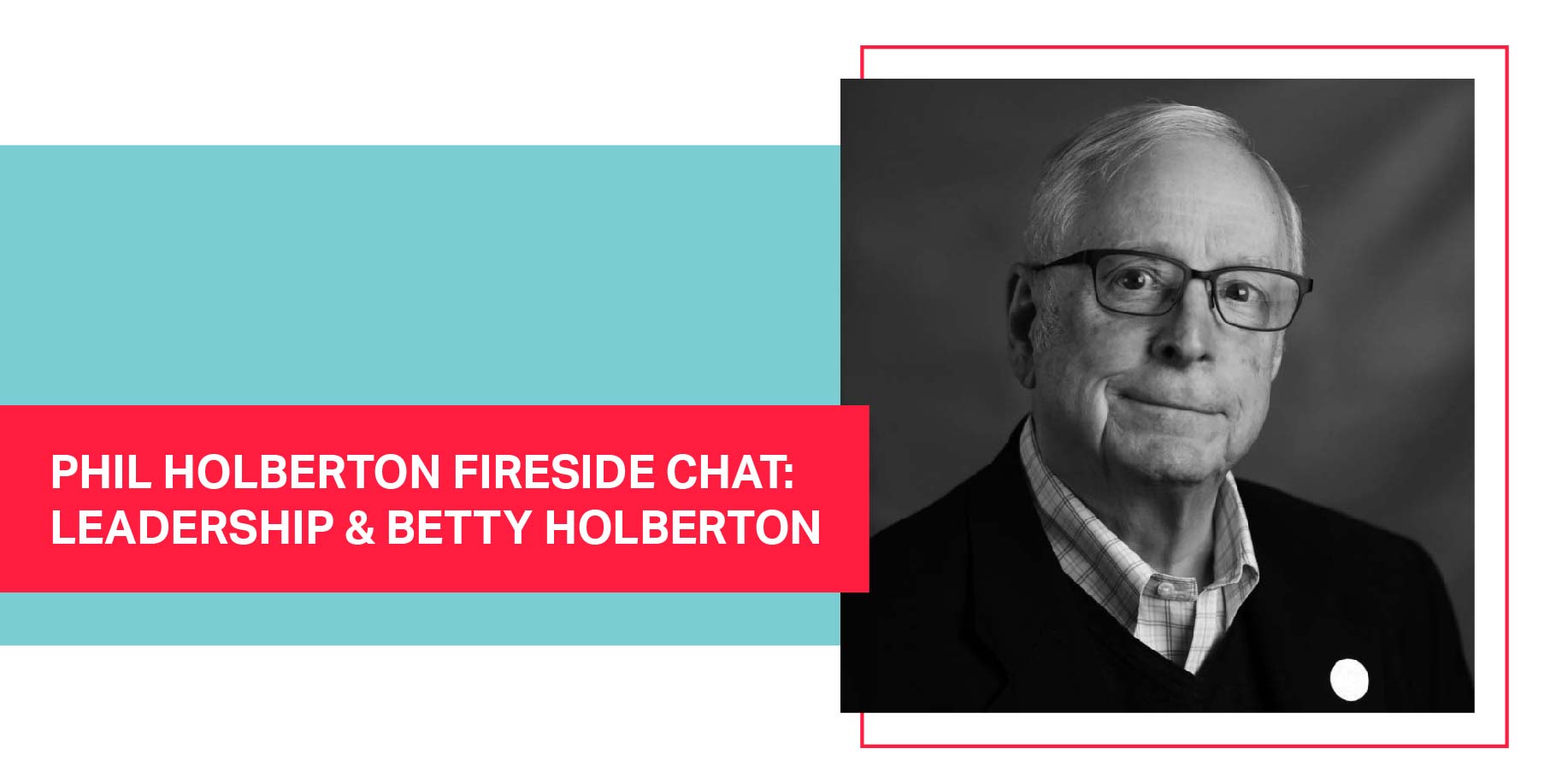 Holberton School was named after Frances Elizabeth “Betty” Snyder Holberton who was one of the six programmers of the ENIAC, which was the first programmable, general-purpose electronic digital computer. Betty Holberton helped create what would later become modern-day software engineering.

We recently had the honor to welcome Phil Holberton, who is Betty’s nephew, for a fireside chat with our students. Former CPA, Phil Holberton delivers executive-level excellence via his consulting firm, the Holberton Group, and publishes a periodic online bulletin, Speaking of Leadership.

Below is a highlight & edited version of some of the Q&As that happened during the fireside chat. The discussion covered Betty Holberton, leadership, and diversity.

Would you mind telling us about Betty Holberton and what made her such a great problem solver?

Betty Holberton had a very strong analytical brain. Believe it or not, when she went to school at the University of Pennsylvania she wanted to join the math department. A profession in the math department said “uh uh” you’ve got to go to Home Economics, Political Science, Journalism or some other department. That began her career in saying, “I am not going to take no for an answer”. She was a very intelligent woman and she had a very strong voice in what she believed in and she just went about it and her problem-solving skills, which I am sure we will get to a little bit further down the line of conversation here, she got to use them quite a bit.

Is it true that in the beginning due to ENIAC projects being classified, Betty and other computers could only work from diagrams and blueprints?

True. As I understand the story, six of the best and the brightest we call to program computers for artillery during World War II. Computers were as big as most rooms are these days. They handed the plans to Betty and her five cohorts and they say, “All we do is have the wiring diagrams and you have to go and figure and help us program this”. And those women, as smart as they were, they figured it out. We are grateful for her past because that was the first computer basically in the United States, the Antioch.

Is it true that Betty solved more problems while sleeping?

When is it necessary to sacrifice individual needs to fulfill team goals and how do you reconcile these differences afterward?

The most important attribute of any company or any organization is to have a vision and a mission statement and you have some culture to help you get there. The interest of the company proceeds the interest of any individual and any team. I am often reminded of the event [with] Johnson & Johnson [about] twenty years ago when they tampered with Tylenol and put poison in it. I can’t remember how many people were killed but it was devastating to America. The CEO at that point in time says, “I don’t care how much it costs. We are taking all of the product off of the shelf and we are all going to start over on Tylenol”. Tylenol was the biggest brand in the world but no one person trumped the ideal mission. “Our customers come first and we protect our patients and out users of our product”. I read somewhere that it may have cost them 250 million or a half a billion dollars to do that and where they probably could have done something different, but that showed integrity. You have to live, I don’t want to say a higher power but you have to have a higher North Star which is usually organizationally driven.

How should leaders best motivate their employees and try to build a sense of community?

The most important thing about leadership is to think of it in two dimensions: Transactional Leadership and Transformational Leadership. Transactional Leadership is when you have control of their paycheck, bonus, and time off, so someone is working for the transaction. The best type of leadership is transformational when they work for you because they want to work for you and they aspire because you are a really good human being. Granted, it is hard for a lot of leaders to behave that way because they were brought up to be A-Types and command and control. When I work with CEOs today, we spend a lot about putting water and sunshine on their executive team and the people inside their organization because If they grow they will be able to grow themselves. I turn it around. If you ever heard the concept of Servant Leadership- it’s like flipping the leadership chart around where the leader is always serving the organization- that’s their higher power. If you can inspire an organization to reach for that North Star and achieve things that otherwise don’t appear attainable, you’ve done a really good job. During this COVID period some of our CEOs rose to the occasion more than I would ever imagine. They are less about command and control and they are more about how they can inspire their entire team to come with me and help us get through this COVID period.

How can one become smarter, more adaptable, and emotionally intelligent?

There are diagnostic tests that help you get a baseline on your emotional intelligence. I advocate a test called Mindsets by a professor in California, Ryan Gottfredson. It is free and it will help you understand whether you have a defensive posture or an offensive posture in the four different dimensions.

When I was teaching at Brandeis my students would ask if leaders were born or were they made. What do you think my answer was? I would say “Yes”. Some had more natural talent than others but like anything, in life, you have got to keep practicing. Some people may have zero knowledge of what the word emotional intelligence means and they may have absolutely incredible natural talent and don’t have to worry about it as much as people that it’s more awkward for. From my perspective, if you want to navigate and get the best out of life, learning this skill is really important for you to learn over time. It will help you in your marriage, in your community, and in your business. I would say to learn that early and often. Practice it.

Why has there been more focus on emotional intelligence separately from IQ recently?

Most hiring practices in North America look at two things: your prodigy and where you grew and they try to assess intellectually your intelligence, particularly if they are trying to hire someone on the inbound side to help them grow within the company.

IQ has always been an important barometer for any hiring organization. I would say companies are now getting more sophisticated in understanding people’s emotional intelligence because they are beginning to recognize that this is a more important attribute as people move up the ladder. I’ve seen statistics that say 75% of the people that work in the company say that they like the company but they don’t like their boss. That says something about your boss in terms of emotional intelligence and if your boss is oppressive, it is going to make it very hard to work for. That being said, emotional intelligence together, we as a society can get much further.

How can those of us in STEM help support diversity?

One thing I am inspired by at the Holberton is it’s a diverse organization and prides itself on admitting students of diverse backgrounds, nationality, color, and ethnicity. The Holberton school within itself is the living practice of what needs to go on in this world. One of my CEOs says “It’s our behaviors that count. It’s not our talk”. Holberton invites people of different nationalities to come in different stages of their career-which is a wonderful attribute. I would opine that the more you get to know people that are not of the same ethnicity as yourself build those friendships and those strengths. Make sure to include time in your schedule every day to build those relationships. When you go work for and they have a couple of hundred programmers, get to know the people first. That’s more important than all the technical skills. Having those relationships is really important. I encourage every man, woman, Black, Asian, American, Indian, regardless of nationality, get to know the people first; get to know your peers and your bosses. We are all human beings. Even though they might be a boss…

When a leader makes a mistake, how do they apologize and make things better for everyone?

First of all, an “I’m sorry” goes a long way. I am learning a lot about communications in my job now working with CEOs. There is a difference between communication that comes from the head and communication that comes from the heart. If you say I’m sorry from the head, forget it, nobody will see it and nobody will believe it. If you come and you talk from the heart, and a lot of CEOs find that hard because they are on defense and want to have a strong view of themselves and not vulnerable. I encourage you to follow Brene’ Brown and her work on vulnerability. She is one of the sought after forefront of thinkers in terms of emotional intelligence, vulnerability, and how to behave as a leader. You have to say it from your heart. If you are not programmed that way, to speak from the heart, one activity you can try is to turn up your music and microphone and speak or write like you are journaling and journal from the heart and usually, you will have something that will start to work there. I have had several CEOs in the last week give me communications they want to share with staff, they were all fine but they did not come from the heart. You will be far more effective if it comes from the heart. Everyone needs to develop these skills.

We are very grateful for Phil for sharing his time, wisdom, and knowledge with our community and for his support of the Holberton School since its inception. The full chat recording is available below.