1 Year of Holberton and Welcoming our 3rd Batch

What a day we had!

It has been a wild first year. First, we raised a $2 million seed round from investors Trinity Ventures (Dan Scholnick; board of directors, Docker and New Relic), Jerry Yang (co-founder and former CEO of Yahoo!), Partech Ventures, Jonathan Boutelle (co-founder of Slideshare) and we were off. Then we welcomed our first class of 32 students with an automated admissions process that accepted (and continues to accept) fewer than 2.5% of applicants (making it more than twice as hard to enter as Harvard). The process also made Holberton one of the most diverse software engineering schools, boasting a 40% class of women and nearly 50% people of color.

In October, we welcomed our second class of 29 students.And with less than half of their two-year program completed, the first class of Holberton students found internships and jobs at top Silicon Valley companies including Apple, Dropbox, NASA and Docker. And because students are trained to “learn how to learn,” companies remarked on their level of knowledge and skillset and how quickly they learned new languages and integrated with their teams.

On Monday, we were delighted to welcome students, relatives, mentors and investors for nice talks, while enjoying tasty food.

What challenges and successes are ahead for the next year, and the new students? We have some ideas 🙂 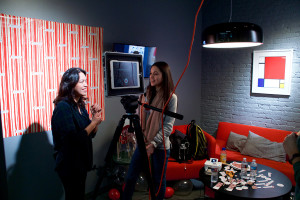